The 2nd annual Arkansas Environmental Technology Award, the “TECHe Award”, was presented to L’Oréal USA. L’Oréal USA’s “Sharing Beauty with All” program seeks ambitious goals for reducing their environmental impact through the entire life cycle of its products. At L’Oréal they are embracing their goals for operation, a 60% reduction from a 2005 baseline in water consumption, waste generation, and carbon dioxide (CO2) emissions by the year 2020. At the end of 2016, an 82% reduction in water consumption, a 40% reduction in waste, and a 76% reduction in CO2 emissions was achieved. L’Oréal USA installed a 1.2 megawatt solar array on its property in North Little Rock.

Clearwater Paper is the country’s largest provider of private-label tissue to retail grocery chains and a world-class manufacturer of high-quality bleached paperboard. The company reduced the amount of mud-lime (solid waste) sent to landfills by 51,000 tons per year by installing a mud-lime flash-dryer and reusing it, reducing operating costs by $4.3 million per year. A number of combined projects reduced water usage by nearly 6,000,000 gallons per day, lowering operating costs by $400,000 per year. Various improvements reduced electricity usage by 29,000,000 kWh per year, reducing operating costs by $1.5 million per year. Natural gas usage was reduced through a variety of upgrades and modifications resulting in 257,000,000 Btu per year, saving $1.8 million annually. Energy reductions resulted in a 15% drop in carbon dioxide (CO2) emissions, or 29,000 metric tons of CO2 per year. 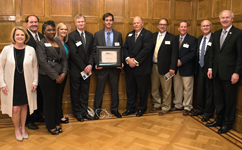 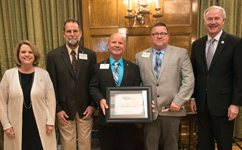